Three internal competitions are held each year with teams competing to make the best film and receive the relevant trophy.  The final competition at the end of the year is for the best film (individual or group) produced within the preceding twelve months.  This competition is judged by our president John Barlow. 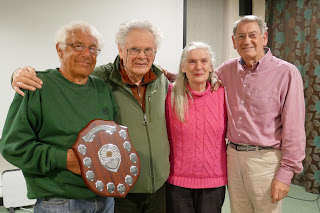 The winning team of Roy Symmons, Bob High, Helen High and Geoff Bourne won the Ron Barnes Trophy for their film "Save That Tree".

The trophy was dedicated to Ron Barnes, a past Chairman and Secretary of the club who was a keen film maker. 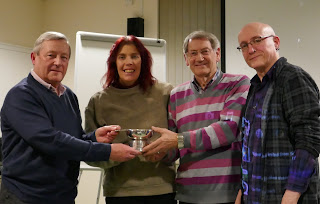 The Ray Barr Trophy was presented, by the Chairman Algie Gray, on Wednesday 21st February to the winning team of Geoff Bourne, Steve Poole and Sara Shankster.

Their documentary, "Crying Out Loud", was  about Dick Smith who has been Beaconsfield's Town Crier for nearly 50 years. 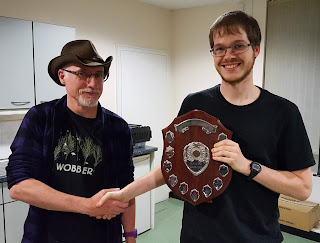 The winning team, led by Will Davies, won the Ron Barnes Trophy for their film "Jerusalem".  The trophy was presented to Will by the Chairman Algie Gray.

The trophy was dedicated to Ron Barnes, a past Chairman and Secretary of the club who was a keen film maker. 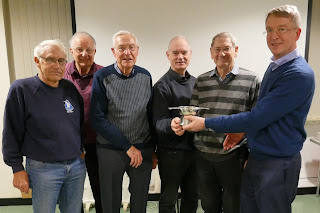 The winning team of Roy Symmons, Richard Gandy, Derek Miller, Rodney Willott and Geoff Bourne won the trophy for their documentary film "Mosaic" which depicts a local artist decorating the front of his house in mosaics.  The trophy was presented by the Chairman, Roger Davies.

Ray Barr was a past Secretary of the club, a regular film maker and the trophy was donated by his family. 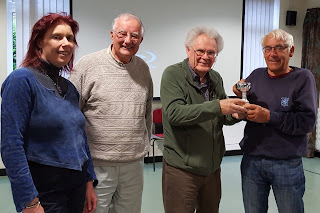 The winning team of Sara Shankster, Richard Gandy, Roy Symmons and Roger Davies (not in the picture) won the trophy for their film "Train of Thought" which was shot on location at Fawley Hill Railway.  The trophy was presented by the Club Secretary Bob High.

The trophy was donated by Ernie Wise who became Club President for several years from 1977. 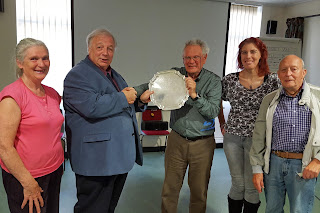 The winning team of Helen High, Bob High, Sara Shankster and David Jarman won the Trophy for their film "It's Going to Rain Today" which cleverly depicts the images and emotions of the words of the song.  The trophy was presented by the current ClubPresident John Barlow.

The trophy was donated by Rupert Davies, the actor who played Maigret in the television series and who was Club President from 1966 to 1977. 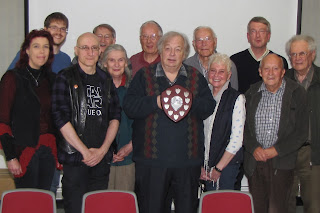 After being finalists twice in recent years the club this year, on the 7th May, won the final round,of the IAC North Thames Region Knockout Competition beating eleven clubs who entered the competition over the preceding rounds.

The Knockout Competition requires a programme of 30 minutes or less and containing no more than five films.

BEFM is affiliated to the IAC